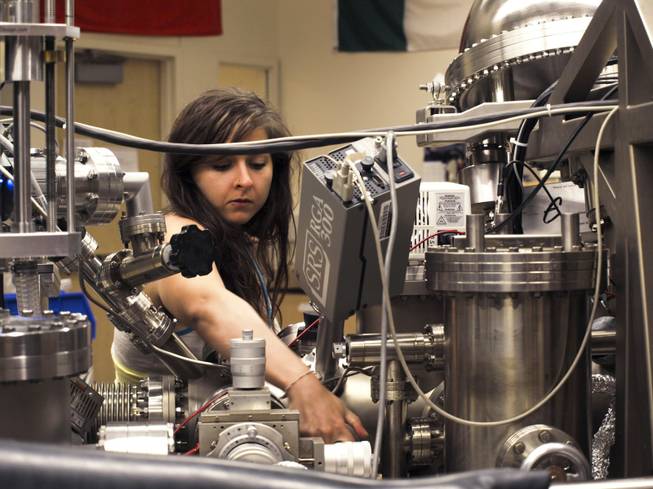 The gleaming behemoth in the bowels of UNLV’s Science and Engineering Building doesn’t really have a name. The scientists that work with it refer to it simply as “The Machine.”

It’s the star of the building’s science tours and resembles something a mad scientist might keep hidden away in a musty basement. Filling a room built specifically for it, there’s just enough space for its human researchers to scurry about. Shiny metal hemispheres bloom out like mushroom caps above a labyrinth of specially made stainless steel chambers and pumps.

The machine creates a super vacuum and shoots X-rays to allow analysis, at the atomic level, of surfaces of various kinds of materials. Few machines in the world can pull off what this machine does. The understanding of some of the most complex aspects of solar and hydrogen technology will likely start here.

When operating, the machine — which was custom engineered and pieced together starting in 2004 — creates a constant buzz, like a tree full of cicadas.

Like all epic beasts, this one comes with its own history. It was brought to UNLV in 2004 by chemistry professor Clemens Heske, crammed into such a small space in UNLV’s chemistry building that it violated fire codes and left Heske no room to expand.

When the Science and Engineering Building opened in 2009, the machine was part of a mass exodus. Twenty-six research groups left their humble offices around the university for space at the new facility. Over a span of 6 months, the machine was disassembled and moved piece by piece across campus to a 1300 square foot room on the ground floor specially built for it.

The instrument is so sensitive that someone walking in the hallway next to it will interfere with the measurements.